Happy November! I hope you all had a spooktacular Halloween, and stayed at least partially dry.

I decided I would post about Halloween a day late, so I could show you pictures of my little trick-or-treater. He went to a total of five houses, just so I could show him off to our neighbours.

He actually did surprisingly well in his costume. He normally tries to rip off a hat or hood the second he feels it on his head, but he tolerated the monkey ensemble.

He wasn’t too sure about the (attached) banana in his pocket, he tried desperately to rip it out.

(He’s walking so much now! Within the last few days, he’s really started walking around like a little person. It’s so funny to see him come around a corner – and I am loving when he walks straight into my arms!)

He already has a little buddy to go trick-or-treating with! 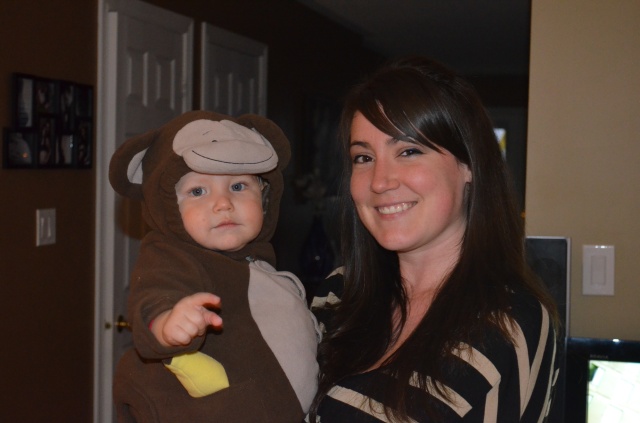 Next year, he may understand the concept of Halloween a little more and maybe we will bring him to seven houses instead of five…