Maxton is officially two-and-a-half. Where has the time gone? I have been looking back at pictures of him when Everly was first born, and he looks like such a baby! I mean take a look at the “then” and “now”. 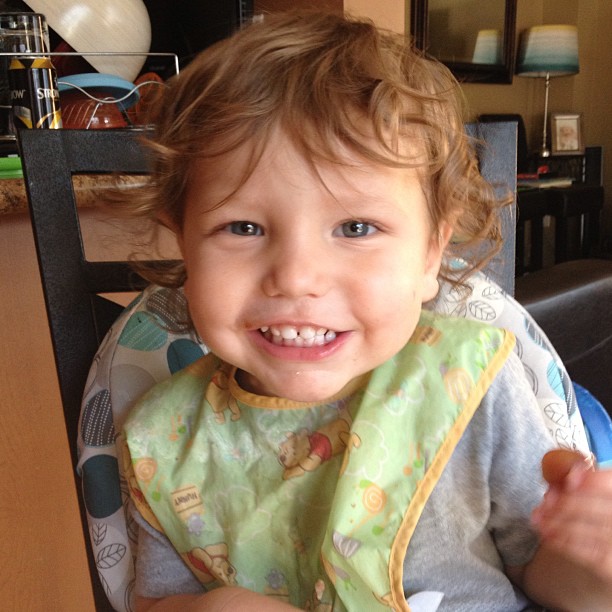 Right??? It’s mind-boggling how grown up he is looking to me. He is starting to look less like a toddler, and more like a little boy.

My last real update of him was when he turned two, and boy have things changed!

– He speaks so well. Full sentences – and he comes up with the funniest things! I wish I could record every second of his day, because you never know what is going to come out of the kids’ mouth.

– He has this goofy smile he semi-fakes. When you ask him to smile, his eyes get all squinty; it’s pretty funny but even more adorable.

– He loves to sing songs. The typical “Itsy Bitsy Spider”, “The Wheels On The Bus”, Old MacDonald” etc. Then he will throw in some Katy Perry “Roar”, you just never know. Ha-ha.

– He is still ridiculously independent and stubborn. He MUST do things his way or the world will cave in. Rather than asking for help or taking our help when we offer it, he will scream and cry and tantrum until he is able to do it himself, or we do it against his wishes. Let me tell you, that kid can tantrum. We went through a phase around Christmas time where he was scratching me in the face and poking my eyes, and constantly trying to slap Everly in the head and poke her eyes. That was rough, but it was a phase he had to go through. It was his way of releasing all of the emotions he didn’t know how to express. Now, we are going through a “NNNOOOOOO” phase which involves his screaming and throwing himself onto the floor to cry and scream at the top of his longs. Fun.

– He still loves playing with cars and trucks, and has more than enough hot wheels.

– The alphabet is a breeze, he loves to count (usually to 40), and he can draw every letter (he’s mastered upper case and we are working on lower case) and number. We are also working on spelling his name on paper – he can spell his name out loud.

– He loves his baby sister. She is starting to laugh and smile at him which he enjoys. He loves to hug and kiss “Ezovey” and will go over to her and try to sooth her if she is upset. It’s very cute. 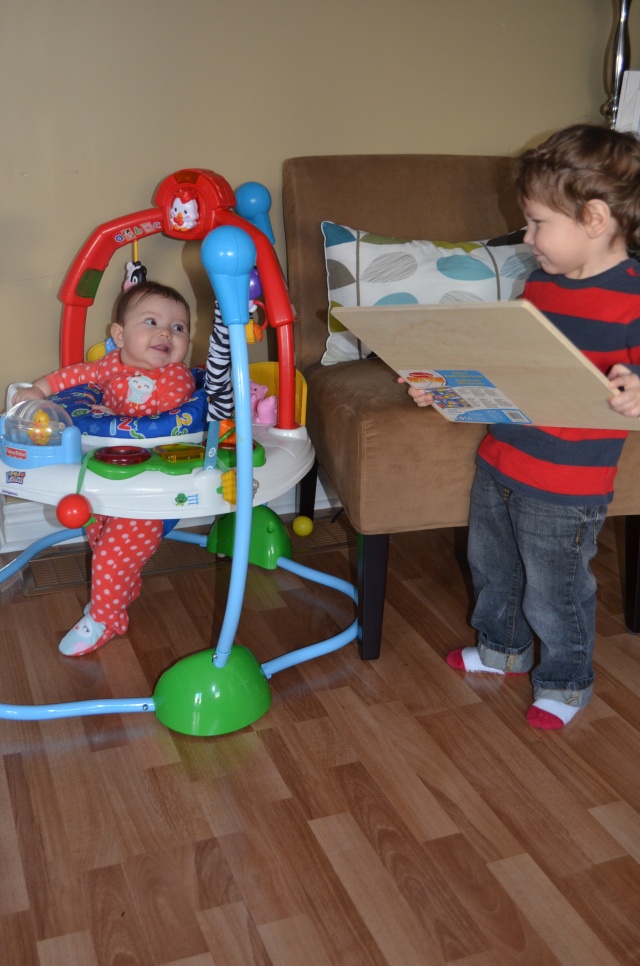 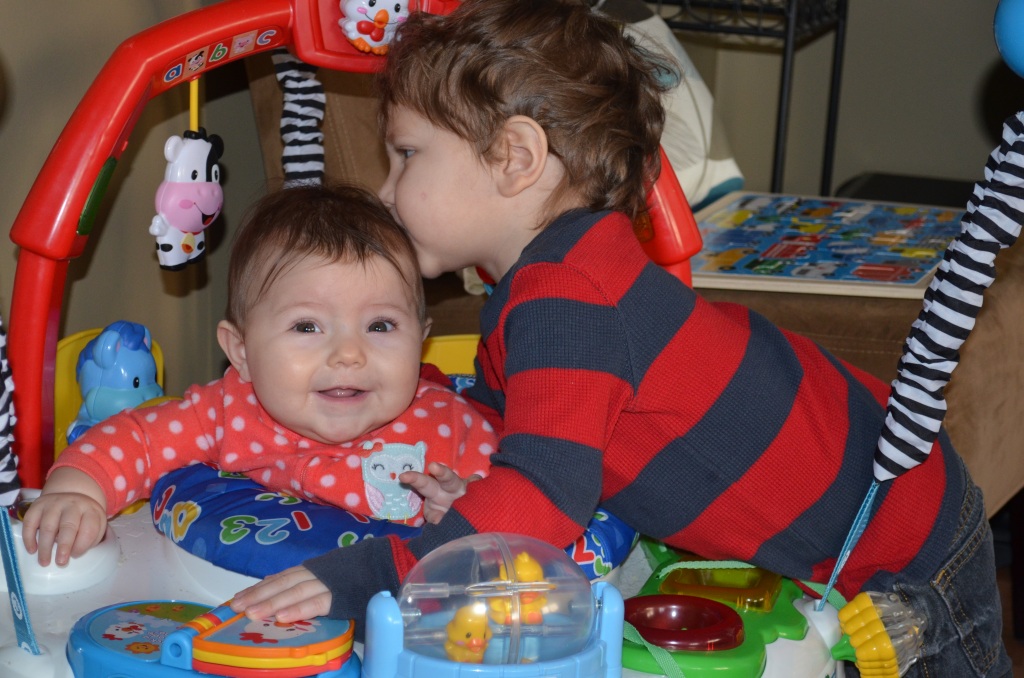 – He is really into puzzles these days. He’s mastering some for ages 4+ so I am trying to get some to really challenge him, without frustrating him. He loves to learn, and loves to practice something until he’s mastered it. You can see the determination in his little blue eyes.

– He is outgrowing his naps, which can make for some long and cranky days, but that’s part of growing up! Let me tell you, if you stuck me in a bed and told me I had to nap, I would be MORE than happy to oblige.

– We are working on the potty training. We have a seat for the toilet, which he didn’t like (my Mom said I used to be afraid of falling in, so I think that was his problem), and a little potty. He will sit on it, but has yet to go. He doesn’t have much of an interest yet. He always tells us after he has gone, never before. It’s a work in progress – we don’t want to push him. I am hoping it clicks with him by the summer.

He is such an amazing little boy, and I am so proud to be his Mama. 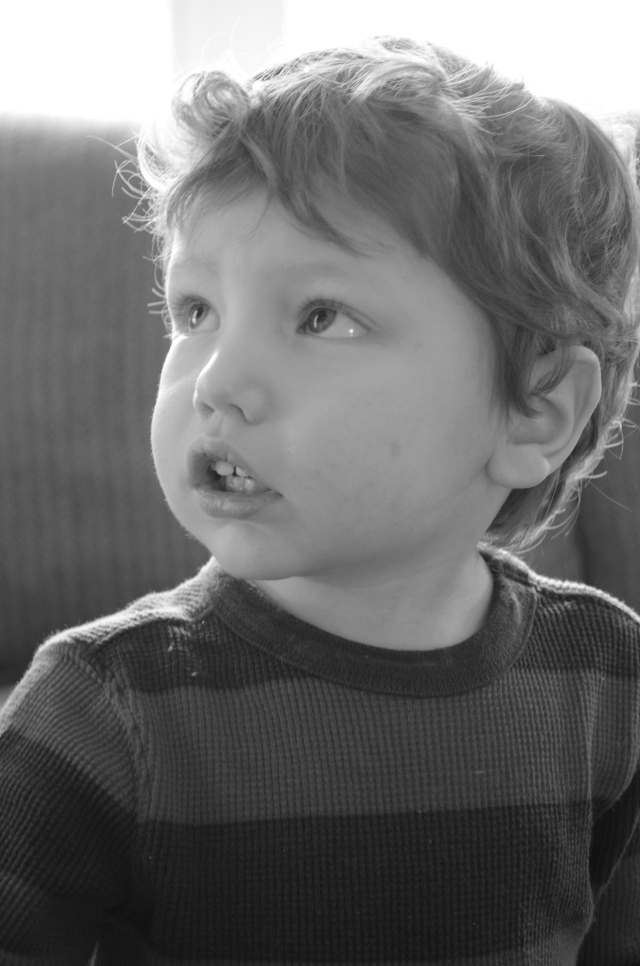